The trial had been working ok but I just upgraded and now it is ignoring the channel I want. I’ve tried changing it to another user but it keeps giving me some random channel. HELP PLEASE.
I have deleted the app in Wix and added it again but get the same result. 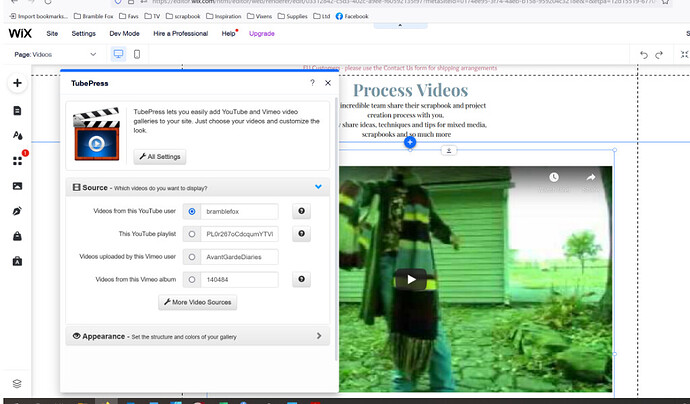 Also tried my personal channel and it says it doesn’t exist. which it does of course.

Hi @cropkat, thanks for reaching out and sorry to hear about the trouble you’re experiencing! Is this the channel you want to display in your TubePress gallery? If so, you can enter that channel ID (i.e. UCw3ovn0a4ZkT-neRa1mEUpQ) in the “Videos from this YouTube user” setting. I’ve tested this on my end and TubePress displays that channel’s videos and not the one I see in your screenshot. If the aforementioned channel is not the one you want to display, please send along the YouTube link to your channel and I’ll be happy to assist further. Thanks!

Hi Elisabeth
It is the correct channel. I couldn’t find the original id only the username.
It had been working with the username before I upgraded to a paid subscription.
Thank you

This is the first report we’ve had of this kind; thank you for letting us know. If there is anything else we can do to assist, please don’t hesitate to reach out again.

what is the solution? I don’t know what to do and I can’t publish my website at the moment without it.

Remove “bramblefox” and replace it with “UCw3ovn0a4ZkT-neRa1mEUpQ” in the TubePress setting and you should be all set. Clicking on the gallery in your Wix editor should update the change and show you the correct videos.

I think it is ignoring the settings on the page that appears from WIX. You have to go to advance settings. It still doesn’t like the username but it has now worked with the userid. Not sure what’s wrong with it.
Thank you for your help.

Were you successful in getting the correct videos to display in your gallery? If not, would you send along additional screenshots of your TubePress settings so we can further investigate?

There is a YouTube user named bramblefox, which contains different videos than the bramblefox.co.uk YouTube channel. I agree it’s very strange that without changes to your TubePress settings your gallery would switch to the other set of videos. Like I mentioned previously, this is the first report we’ve had of this. We have seen the occasional glitch where YouTube temporarily shows fewer videos than exist in a playlist, but not a change of user or channel.

Hi Elisabeth
It is working with the id you gave me now. I’m not sure why it worked with my username before I upgraded. thanks for your help.